This year could be the first time in five years Ibrahim Haron enjoys a bomb-free existence. The possibility comes from a surprise last-minute move from the Obama administration last week to lift U.S. economic sanctions against Sudan in return for a series of concessions, including an end to hostilities in Sudan’s internal wars in Darfur, the Nuba Mountains and Blue Nile.

But Haron, a 68-year-old shopkeeper who has lived in war for years, is skeptical. He suspects Khartoum will renege on any promise, even one made with the United States.

“Civilians [in the Nuba Mountains] have been suffering over five years with false promises from the government of Sudan,” Haron said. “Until now there have been around 12 rounds of peace talks, but they have not lead to any fruitful results.”

Since 2011, the Sudan government has sought to defeat rebel fighters in the Nuba Mountains who, after years of neglect from the central riverain government, demand greater autonomy in their remote border region. Haron knows how scarce basic commodities become during wartime in the Nuba Mountains – where the conflict has triggered mass displacement and food insecurity.

The U.S. originally issued economic sanctions against Sudan in 1997 for supporting terrorism, specifically for harboring the former Al-Qaeda mastermind Osama Bin Laden, and in 2006 for its continued violation of human rights in the conflict in Darfur where over 300,000 people have been killed. But now these sanctions are to be lifted, allowing Sudan to trade extensively with the United States and attract much-needed investment in its collapsing economy.

According to the agreement, the U.S. will end a 20-year economic embargo on Sudan – allowing both imports and exports (including gas and oil), as well as unfreeze government Sudanese property and assets held in America. In return, Sudan is expected to stop supporting rebels in South Sudan, cooperate with American intelligence, improve access for aid groups and cease bombing rebel territory.

The catch is a probationary period of six months. The sanctions will be eased in 180 days only if Sudan “has sustained the positive actions” that the U.S. says led to President Obama’s executive order in the first place.

This could mean a very overdue break for Haron and other civilians in the Nuba Mountains from at least six months of government warplanes bombing civilian targets, including schools and hospitals. Nuba Reports has documented more than 4,000 bombs dropped by the government on civilian areas in the region since 2012.

Citizens in Kauda, the rebel-controlled capital in the Nuba Mountains, told Nuba Reports they are not convinced and deeply distrust Sudan’s President Omar Al-Bashir and the ruling government in Khartoum.

“Khartoum is very clever in dealing with the international community,” says university student Daud Kodi, in Kauda. “With the lifting of sanctions, they [the Sudan government] will be able to access more hard currency so they can focus on buying weapons for warfare, instead of buying medicine for the people.”

Bashir’s government has a long history of breaking promises. Sudan has breached at least half a dozen ceasefire agreements in the past. A week ago, government forces defied Bashir’s own pronounced ceasefire and attacked a rebel position in Arum in Blue Nile State, according to news reports and aid agencies. Sudan warplanes also recently bombed Um Dorein and Hajar Bako in the Nuba Mountains during an alleged ceasefire, injuring two children.

“How can you lift sanctions because Khartoum has ‘improved?’ Where is the improvement here?” said Kodi, the university student. “That is just improvement via the media, but it is not the case on the ground.”

“You cannot really trust the Sudan government, unless there are pressures put over them,” he said.

According to the State Department, Sudan has shown “significant progress” in the last six months in ending military operations within the country, improving humanitarian access and countering terrorist groups. While there have been few bombings in the Nuba Mountains since May, bombings typically slow every year during the rainy season starting in June, and generally pick up again during the dry season sometime between December and March. Notably, Sudanese troops continue to hold fertile farmland in the Nuba Mountains from the last fighting season.

The State Department cited humanitarian access granted by Sudan to aid agencies to Golo town in Darfur and revised directives to allow improved aid access to areas in need. Rights groups too have called this claim into question. As recently as September, the government allegedly used chemical weapons in Darfur. Leslie Lefkow, the deputy director of the Africa Division for Human Rights Watch, called the U.S. government’s claims of progress “inexplicable.”

“Many Sudanese, and those, like me, who have followed Sudan’s developments the past two decades, will ask, ‘What sustained progress?’” she wrote in reaction to the news. “The government has broken innumerable promises over the years, so why not wait to lift sanctions until after there is real progress?”

Humanitarian access routes to the conflict areas constitute the central reason the last internationally brokered peace talks collapsed in Sudan. Khartoum has denied aid access emanating outside the country since the war started, harboring deep suspicions over aid routes being misused by the rebels for military purposes. The government nominally supported a Memorandum of Understanding between the rebels and international actors to provide humanitarian access to war affected areas in 2011 but the document was never implemented to date.

Meanwhile, Bashir remains wanted by the International Criminal Court for crimes against humanity, genocide, and war crimes in Darfur. No charges have been brought for alleged crimes committed in the Nuba Mountains and Blue Nile.

“Every Sudanese living in Sudan knows exactly the atrocities the government of Sudan is committing against their own people,” Nagwa Konda, a Nuba civil society activist, told AJ Stream in a September debate among Sudanese about lifting sanctions. “Sanctions are the only international recognition of the misbehavior of the government of Sudan, especially in the Nuba Mountains and southern Blue Nile.”

Observers have said the State Department was motivated almost entirely by Sudan’s counter-terrorism assistance. Deputy State Department Spokesperson Mark Toner says Sudan is helping the U.S. in countering the terrorist group the Islamic State in the Levant (ISIL) among other regional terrorist threats.

But this is the fear of many Nuba people: The U.S. may be using the carrot instead of the stick for short-term gains while sidelining the concerns of the war-affected populations in Sudan. With Khartoum blocking media access to the conflicts in Darfur, the Nuba Mountains, and Blue Nile, this makes these populations even easier to forget. 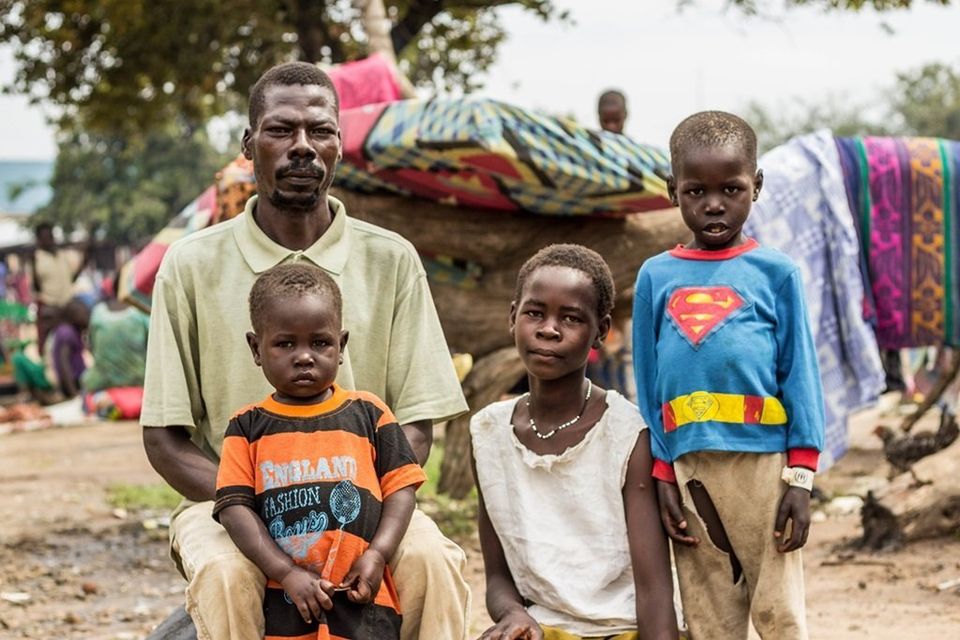 1 / 17
Michael T., 42, and his three children wait to be relocated from the Ocea Reception Centre to the Bidi Bidi refugee settlement. "I was in Juba with my family on July 7. At around 10 a.m., we heard gunshots. People got confused. Everyone started running around, looking for shelter. My wife and oldest son were caught in the middle of gunfire. I lost them. My wife and my son."&nbsp;<i>Location: Ocea Reception Centre, Nov. 4, 2016.</i>
Natalia Jidovanu