We always thought deodorant mainly affected how close other people will stand to you. But new evidence suggests it also can influence how masculine or feminine other people perceive you to be.

When women wear deodorant, both men and women rate the scent as “more feminine” than an unmitigated, deodorant-free aroma, according to a study by researchers at Scotland's University of Stirling published in the journal Evolution & Human Behavior. The study involved 239 men and women rating “odor samples” (mmmm) of 20 men and 20 women.

But when men wear deodorant, it gets a little more complicated, lead author Caroline Allen told The Huffington Post in an email. Some men were rated as smelling more “masculine” when they wore deodorant, but only when women were the ones doing the rating. And only if their un-deodorized scent was rated as having “low” masculinity.

But there are a few big caveats to the research. For one thing, terms like “masculine” and “feminine” are extremely subjective, and depend a lot on culture. High heels used to be considered masculine, for example. So, smells that seemed “masculine” or feminine” to subjects in Scotland, for example, may be totally different from what would seem masculine or feminine to people in another country, or another time period.

Plus, the effects could just the result of advertising -- and the ubiquity of deodorant -- warping people’s minds.

“We’re all aware that fragrances are often marketed as being feminine or masculine -- take Old Spice for instance, who have recently parodied this with their hyper-masculine adverts, claiming that their product will allow you to smell like a super masculine guy,” Allen said in a news release.

But if you’re used to repeatedly hearing that particular scents are “feminine” or “masculine,” it's likely that you’ll think those scents are feminine or masculine-smelling. It’s unclear whether deodorant would influence those kinds of perceptions without such outside influences.

And finally, a lot of deodorants are available with a lot of different fragrances. But it’s impossible to tell which fragrances might be having this effect, because the study only had participants use their “usual deodorant.”

“We didn’t control for deodorant type, which is something that future studies should do,” Allen told HuffPost.

But, as Allen pointed out, even controlling for a particular deodorant would present its own issues, as the same fragrance could smell different on different people.

PHOTO GALLERY
What Women With Great Skin Do Every Day

If You Want Women To Think You Smell Manly, Maybe Try Deodorant
What Women With Great Skin Do Every Day 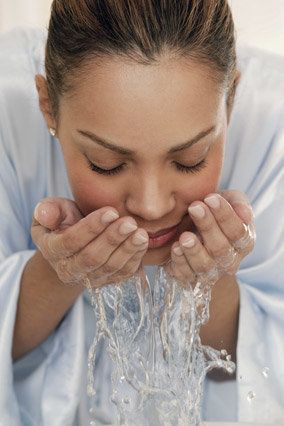 1 / 6
They Cleanse Gently, Once A Day
Unless you have oily skin, you only need to wash your face in the evening, with a creamy cleanser and lukewarm water. Give the cleanser time to work. "Instead of scrubbing your face, let the cleanser sit on your skin for several seconds and break down the makeup, dirt, and oil," says Boston dermatologist Ranella Hirsch, MD. In the morning, simply splash your face with lukewarm water. (If you're oily, use a gentle foaming cleanser morning and evening.)
Thinkstock