I grew up eating the traditional stovetop stuffing. You know, the kind in the bag where you add some onions and celery, and call it a day. It wasn’t until my late teens that I realized stuffing could actually be made from scratch. Then I later went to culinary school and started making my own homemade version and thought it was pretty damn good.

But then, a few years ago, my wife’s best friend came over and delivered us literally the most perfect stuffing I had ever had. It was all the things a stuffing should be ― crispy on the outside, soft and moist on the inside and packed full of flavor. But there was a twist ― it was in the shape of a loaf. I was intrigued and immediately had a million questions.

First off, it’s made with only six ingredients. How could a dish with only six ingredients have so much flavor? The answer is chicken stock. The success or failure of this dish lies in the quality of broth you use. You’ll want to make your own or invest in a stock that you know tastes great. The bread absorbs all of the seasonings of the broth and becomes the main flavor of the dish, so go big or go home. A stick of butter doesn’t hurt the flavor, either.

The other trick to this stuffing is that it’s cooked in a water bath, also known as a bain-marie. The pan is nestled inside a larger pan of hot water in the oven, insulating the bread and keeping the oven moist, therefore keeping your stuffing moist. It also helps to cook it evenly, so the outer edge of your stuffing won’t bake faster than the center.

If you’re in the market for a new stuffing this year, look no further than this stuffing loaf. It tastes even better the next stay for breakfast slathered with butter.

3. Add onion and celery. Sauté until onion is translucent, about 7 to 10 minutes.

4. Transfer to a large bowl and mix with stale bread, chicken stock and egg. Season with salt.

6. Place loaf pan in large casserole dish. Pour hot water in bottom of casserole dish until it reaches about 1 1/2inches up the side of the loaf pan.

9. Let cool for 10 minutes in pan on a wire rack. Then slice and serve.

These Kicked-Up Sweet Potatoes Are Just What Thanksgiving Needs 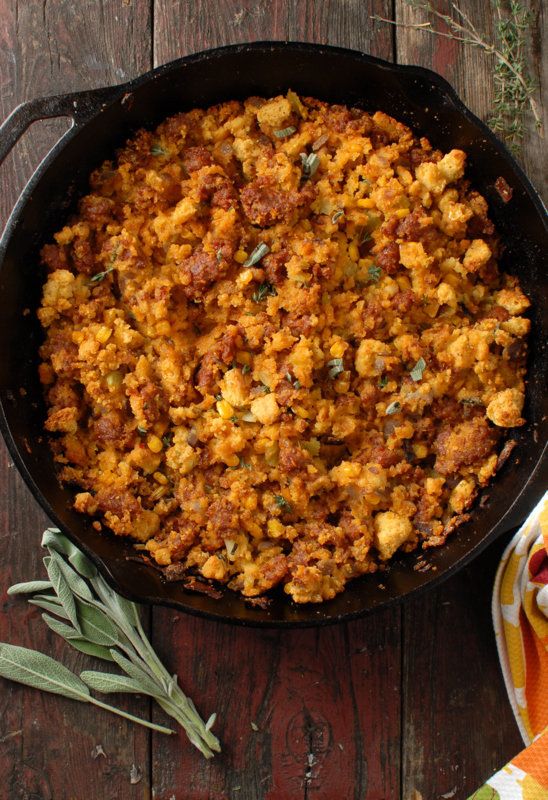 On Assignment For HuffPost

This Culinary Magic Trick Will Cut Your Caramelization Time In Half

Chefs Reveal The Best Foods To Make In An Instant Pot

How Balancing ‘Warming’ And ‘Cooling’ Foods Could Benefit Your Health

No, Your Romantic Partner Does NOT Have To Keep Up With Your Work

Here’s The New Thing To Watch On Netflix Right Now

The Best Lingerie And Sleepwear To Slip Into On Valentine's Day

Newsletter Sign Up
The best recipes, kitchen tips and genius food facts
Subscribe to HuffPost’s food email.
Thanks!
You have been successfully signed up.